An Evening of Short Indigenous Films 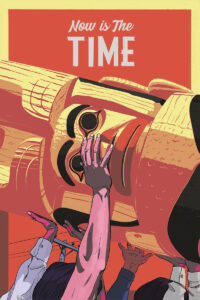 Four short films that celebrate the art and culture of Indigenous Peoples on the Pacific Coast, with opportunity for lively discussion about these acclaimed artists and their engaging stories. Facilitated by Pauline Le Bel.

Now Is the Time

In 1969, when internationally renowned Haida carver, Robert Davidson, was 22 years old, he carved the first new totem pole in almost a century. On the 50th anniversary of the pole’s raising, Christopher Auchter’s film revisits that day when the entire Massett village gathered to celebrate an event that would signal the rebirth of the Haida spirit.

Celebrated filmmaker, Alanis Obomsawin, on a visit to the Lil’wat Nation in interior BC, follows master basket maker, Mathilda Jim, of the Stl’atl’ixmx Nation as she weaves in the traditional manner. A very short loving film.

Lawrence Paul Yuxweluptun is one of Canada’s most important painters. In this documentary, we get a close look at his powerful work, and meet the man who decided to take matters into his own hand and shoot the Indian Act. Wonderful music too.

Born in Saskatchewan of Cree parents, singer/songwriter, musician social activist, Buffy Ste Marie was the first Indigenous person to win an Oscar. Internationally recognized for her songs Up Where We Belong and Universal Soldier, she is still going strong at age 81.

This event is part of the series Knowing Our Place Celebrates National Indigenous Peoples Day. See our other events in this series here.

Knowing Our Place is an initiative brought to you by the Bowen Island Library, the Hearth Gallery, and Pauline Le Bel. The aim is to learn our true history with Indigenous peoples and to foster mutually-enhancing relationships. This series is funded by the Government of Canada.